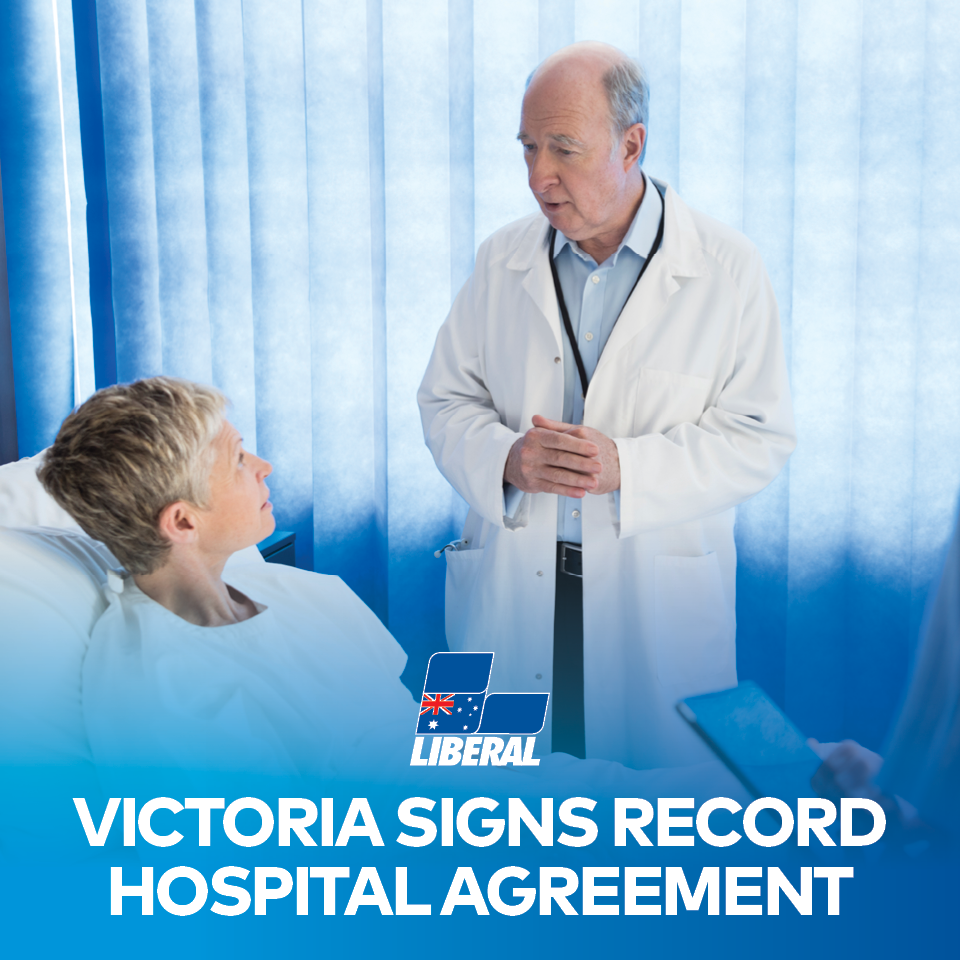 The Morrison Government will provide an additional $7.3 billion in funding for Victorian public hospitals and patients, after Victoria signed on to the public hospital agreement.

The National Health Agreement from 2020-21 to 2024-25, will deliver record hospital funding in each and every year, providing millions of additional hospital services for patients.

Under the Agreement, Victorian public hospitals will receive over $32.4 billion over the five years to 2024-25, delivering an additional $7.3 billion in funding.

This Government is delivering over $2.6 billion more to Victorian hospitals this year when compared to what the former federal Labor Government funded in their last year in office.

Minister for Health, Greg Hunt, welcomed the constructive engagement with the Victorian Government, saying the funding was “vital for Victorian patients.”

“In particular, I welcome the cooperation on delivering funding certainty,” Minister Hunt said.

“It is agreed that changes in methodology will be implemented through a transition period to ensure accurate information is collected and provided to the independent funding body.

“This ensures budget certainty for Victoria whilst the Commonwealth will only pay for services where there is evidence that they were delivered.”

Member for La Trobe Jason Wood welcomed the announcement, saying it reinforced the Morrison Government’s commitment to a healthier Victoria.

“This funding increase of $7.3 billion is going to benefit all Victorians,” Mr Wood said.

“For Victorian public hospitals to receive more than $32.4 billion over the next five years, is a tremendous result.”

The funding is in addition to the $460 million the Morrison Government is investing in a range of health medical research centres throughout Victoria, including the Centre of Excellence in Cellular Immunotherapy at Melbourne’s Peter MacCallum Cancer Centre, that will save and protect lives.

Seven of Australia’s eight states and territories are now covered by the record funding agreement, including four Labor governments and three Liberal governments.

We encourage Queensland to join their colleagues in securing an additional $8.4 billion for Queensland public hospitals and patients, providing more doctors, nurses and services.

Queensland’s refusal to sign on to this record funding deal is blocking access for other states and territories to $50 million in health innovation funding.

The new five-year funding agreement will deliver $131.4 billion in Commonwealth hospital funding, including $31.4 billion in additional funding across Australia - delivering millions of new and extra hospital services to patient’s right around Australia.