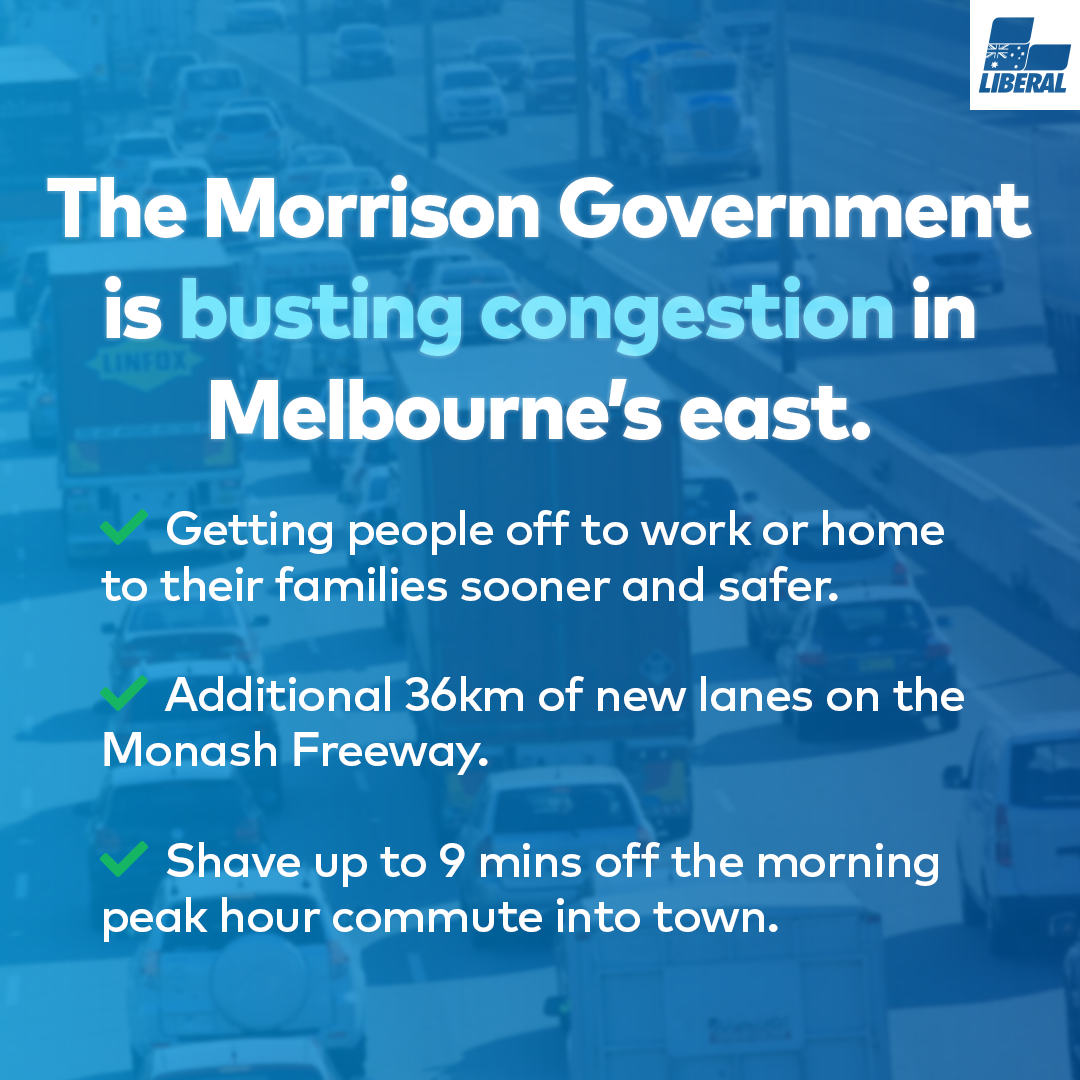 An extra 36 kilometres of new lanes will be added to the Monash Freeway under a joint Australian and Victorian Government plan to bust congestion in Melbourne’s east.

The Morrison and Andrews Governments have committed an extra $367.5 million towards the Stage 2 Upgrade of the Monash Freeway.

Prime Minister Scott Morrison said his Government had prioritized getting people out of traffic and off to work or back home sooner and safer.

“This project is a top-order congestion-busting priority for Melbourne and we’re going to get it done,” the Prime Minister said.

“This project is going to be a significant boost to the local economy which is why we’ve been working closely with Premiers like Daniel Andrews to get this work underway as quickly as possible.”

Victorian Premier Daniel Andrews said the upgrade would significantly improve safety and reduce congestion for the 470,000 drivers making trips on the Monash each day.

“We’ve already delivered the first stage of upgrades on the Monash and we’re getting on with the next – to get people in Melbourne’s booming south-east home safer and sooner,” the Premier said.

“The extra lanes will slash nearly ten minutes off the morning peak hour commute into town, and better connect the Monash with Eastlink.”

The second stage of the upgrade will expand the Monash from eight to ten lanes between Springvale Road and EastLink, and from four to six lanes between Clyde Road and Cardinia Road – slashing nine minutes off a morning peak hour trip between Pakenham and Malvern.

There will also be better connections at Beaconsfield, and links to an upgraded and extended O’Shea Road that will feature two extra lanes in each direction. The upgrade will also create a new outbound entry to the Monash Freeway at Police Road and a modified outbound Jacksons Road entry to EastLink making it easier and safer to access both the Monash and EastLink.

Federal Minister for Population, Cities and Urban Infrastructure Alan Tudge said the project was a crucial next step in easing the frustration felt by Melbourne commuters.

“This will improve access along the Monash Freeway, it will slash nine minutes off a morning peak hour trip between Pakenham and Malvern and 13 minutes in the evening peak period,” Mr Tudge said.

Victorian Minister for Transport Infrastructure Jacinta Allan said the next stage of upgrades to the Monash were part of the Victorian Government’s more than $50 billion investment in Victoria’s road and rail network.

“The next stage of the Monash Freeway Upgrade is part of our unprecedented investment in Victoria’s road and rail network – to get people home safer and sooner, wherever they live,” Minister Allan said.

“The project includes the upgrade of the Beaconsfield Interchange and the extension of O’Shea Road in Berwick, which will facilitate the Minta City development, opening 10,000 new job opportunities which would greatly benefit residents in the south east,” Mr Wood said.

Victorian Member for Bass Jordan Crugnale welcomed the important milestone on the project and the benefits it would bring.

“The extra lanes will make a real difference for local motorists, saving time and hassle in the morning and getting them home quicker at the end of the day,” Ms Crugnale said. New intelligent transport technology will be rolled out along the freeway corridor to improve traffic flow and allow for real-time traffic management when accidents occur.

Construction of the new lanes will start early 2020 and is expected to be completed in late 2022. This is the final stage of the $1.4 billion Monash Freeway Upgrade, being delivered by Major Road Projects Victoria.